APS customers get solar after sunset with major clean-energy projects

PHOENIX – Customers of Arizona Public Service (APS) will soon power their homes and businesses with solar after sunset thanks to three major clean-energy initiatives.

APS will add battery storage to its existing fleet of solar power plants, build new solar plants with storage, and use storage to deliver cleaner energy to customers at times of peak energy usage. As a result, APS customers will be able to use solar energy even after the sun goes down. Family dinners, prime-time television and bedtime reading lights will all be powered by a cleaner energy mix.

“Arizona is already a national leader in solar energy. The challenge is, no one has figured out how to stop the sun from setting at night,” said APS Chairman and CEO Don Brandt. “As storage technology improves and declines in cost, we will increasingly be able to store the power of the sun cost-effectively to deliver when our customers need it.”

“Large-scale battery storage is a critical step on the path to reliable and affordable clean-energy solutions,” said Pat Graham, State Director, The Nature Conservancy in Arizona. “Clean energy and clean air are important to the health of our communities and the lands and water upon which all life depends.”

APS already provides customers with an energy mix that is 50 percent clean and getting cleaner. The initiatives announced today will add 850 megawatts of battery storage and at least 100 megawatts of new solar generation by 2025, for a total of 950 megawatts of new clean-energy technology. This represents a major down payment on Arizona’s continued progress toward an energy future that is clean, reliable and affordable.

“The Energy Storage Association congratulates APS for cementing its leadership among utilities by integrating energy storage into its system operations and realizing savings for consumers,” said Kelly Speakes-Backman, CEO of ESA. “We especially applaud APS for partnering with third parties in this effort, sending a strong signal for businesses to invest in energy storage in Arizona. We look forward to that day when energy storage is the central tool for maintaining a reliable and resilient, efficient, sustainable and affordable grid.”

Adding Storage to Existing Solar Plants. APS owns and operates large-scale solar plants throughout the state that will be upgraded with 200 megawatts of battery storage systems. A team led by Invenergy will install six of the new battery systems at solar plants in Maricopa County and Yuma to be in place by 2020. The remaining two upgrades will be completed by 2021.

"​As storage technology improves and declines in cost, we will increasingly be able to store the power of the sun cost-effectively to deliver when our customers need it.” – Don Brandt, APS Chairman and CEO 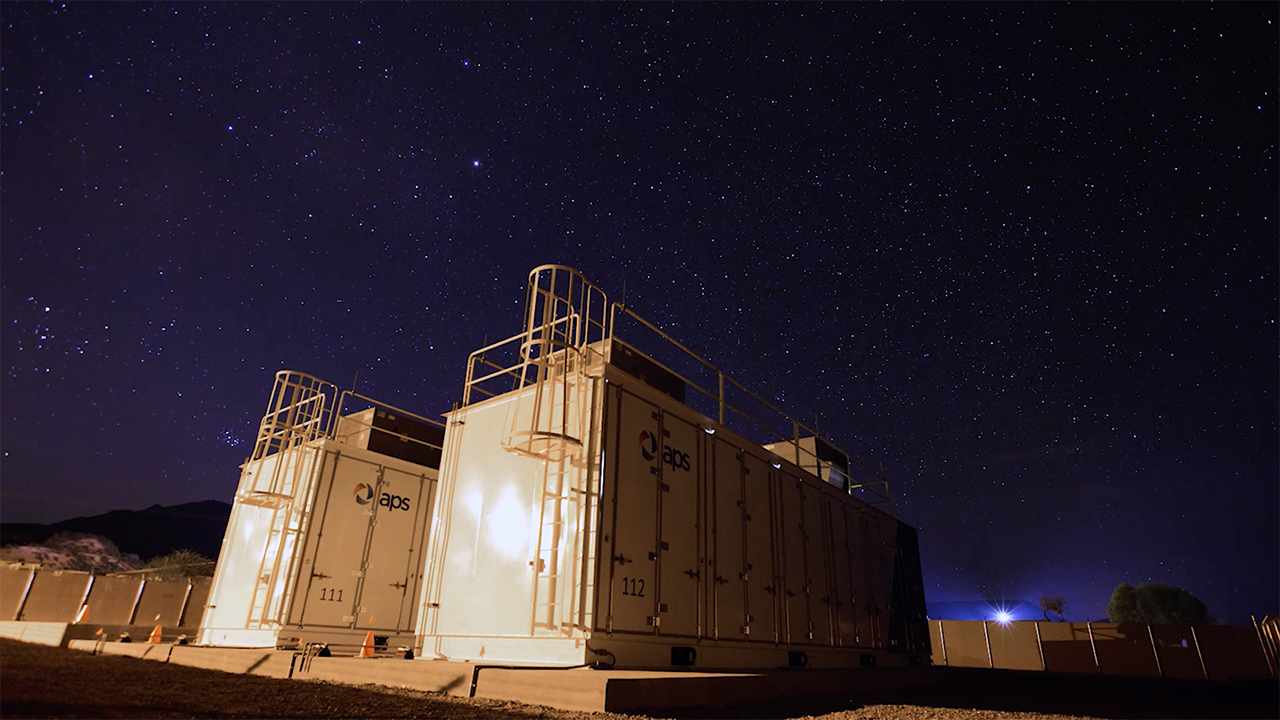 Building New Solar Storage Plants. APS plans to build an additional 500 megawatts of solar storage and stand-alone battery storage by 2025. The first project will be a 100-megawatt solar-storage plant. APS expects to issue a request for proposals this summer. APS is already partnering with Tempe-based First Solar to build a first-of-its-kind solar-plus-storage project that will be one of the largest in the country when completed in 2021.

Delivering More Clean Energy When Needed. When solar production declines late in the afternoon and energy usage is still high, electricity companies need a reliable, flexible source of power to serve their customers. Traditionally, that source has been exclusively natural gas. Today’s announcement signals a new direction: APS will use 150 megawatts of solar-fueled battery storage to meet part of the demand when energy usage peaks.

The battery storage will come from two projects: a 100-megawatt battery provided by AES, and a 50-megawatt battery by Invenergy. Additional natural gas will come from a contract with Calpine for 463 megawatts of energy; however, instead of a traditional 20-year contract, the purchase agreement with Calpine is seven years, allowing APS the flexibility to take advantage of cleaner technologies in the future as they mature. This is part of a long-term clean-energy transition in which renewable and storage technologies will play an increasingly important role.

Today’s announcement continues APS’s record of leadership in solar storage technology. Solana Generating Station in Gila Bend was the largest thermal solar-storage plant in the world when it began operation in 2013 and has been providing 100 percent of its generation output to APS customers since.

For more information on APS’s solar storage and other clean-energy advances, visit azenergyfuture.com.

APS serves about 2.7 million people in 11 of Arizona’s 15 counties, and is the Southwest’s foremost producer of clean, safe and reliable electricity. Using a balanced energy mix that is 50 percent carbon-free, APS has one of the country’s most substantial renewable energy portfolios, and owns and operates the Palo Verde Generating Station, the country’s top power producer and largest producer of carbon-free energy. The company is also a proven leader in introducing technology and services that offer customers choice and control over their energy consumption. With headquarters in Phoenix, APS is the principal subsidiary of Pinnacle West Capital Corp. (NYSE: PNW).